Interesting race for me – Beg. 35-44 on my FrankenBike with 1×9 and 36T chainring and bashguard, assembled 2 days ago.
Still waiting on my new frame, so I rode a hardtail for the first time in many many years (my last full rigid was a Bianchi Volwerine circa 1993).

HT takes its toll on the body and I found it really difficult to climb on the bumpy stuff: luckily there wasn’t’ much to climb. The 36T 1×9 worked ok for this course although i dropped the chain at least 3 times
The rear brake started misbehaving almost immediately after the start and squealing like a pig and by the end of the first lap was useless (no modulation, either on or off) and so I washed out a couple times too in the berm section.
Not bad as a laundry list of excuses, but it’s not about the bike (somebody says) so I’ll have to work harder on training as Mike and Kris seemed unstoppable this time 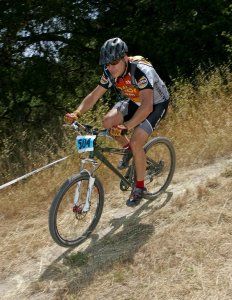 The highlight of the day was that a PRO rider asked for my bike for warming up – apparently waiting on his dad’s bike that was still racing in sports….
I take partial credit for his victory … as my witty wife noted “prolly he would have won on your crappy bike too….”

With 20 years as a hardware engineer, Marco has been geeking out his entire life. He loves solving a good problem. He’s also a lifetime athlete, competing in martial arts, diving, sailing, and bicycle racing. He’s combined his two passions – engineering and cycling – to focus on helping other endurance athletes reach their athletic goals. He’s been racing bikes since 2005, focusing on cross country mountain bike, ultra-endurance mountain bike (8 hour/24 hour/100 mile), and cyclocross. He loves epic rides on road and dirt. Marco is a USA Cycling Level 3 Coach and has participated in coaching education programs with Training Peaks. View all posts by zenturtle